Today, on the 102nd Anniversary of Titanic’s sinking, we continue to honor the religious heroes of Titanic. The men who continued to preach the gospel to the unsaved as Titanic met it’s fate. Today, I would like to introduce you to Father Thomas Byles. He was from Essex, England and traveled 2nd Class aboard Titanic at age 42. 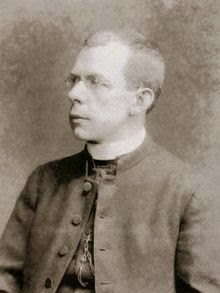 “What a glorious day it is, my friend, as are they all, God willing. I’m Father Thomas Byles, a convert to the Roman Catholic faith, assigned to St. Helen’s Parish in Essex, England. When I received word my brother in New York City wanted me to officiate at his wedding, I arranged to sail on Titanic. “

“I can’t say I was completely comfortable on the ship: I found its vibration and the engine-room noise quite unpleasant. However, my discomfort was eased greatly after I became acquainted with two other priests on board. “

The morning before the collision, I said Mass for passengers in both Second and Third Class. Ironically enough, I based my sermon on the need for a spiritual lifebelt during times of temptation. After the collision, I assisted many 3rd class passengers up to the lifeboats. As Titanic slipped away, I preyed the Holy Rosary, heard confessions and gave absolution to more than 100 passengers trapped at the stern of the ship. I felt God had intended foer me to be there, and that I was fulfilling my destiny.

May God Bless You and Keep You.