Jaynee’s Life in a day 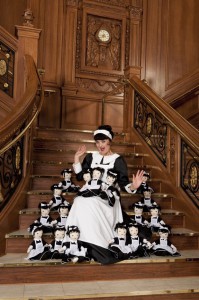 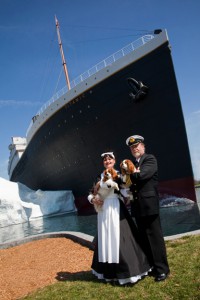 On July 24, 2010, Kevin McDonald, a Hollywood film maker for Sundance, asked the World to video a portion of what their lives were like that day, mundane or exciting, and upload it to YouTube to be used in a movie called, LIFE IN A DAY. Jaynee, the famous 1st Class Maid of the Titanic Museum Attraction, wanted to share her daily “behind the scenes” life with the world and I was picked to film it.

Jaynee is the “personality” that the Titanic Museum Attraction uses for commercials, billboards, print ads, etc. She is like the “Mickey Mouse” of the Titanic Museum Attraction. I frequently get asked a lot of questions about her. “Is Jaynee real?” “Does Jaynee fake an accent for her job?” “Where is she from?” I have now learned the answers to these questions first hand and will share them with you. Jaynee is real of course. She is one of the most passionate ladies that I have ever met. If you have ever been lucky enough to meet her at one of the Titanic Museum Attractions and have seen her “in character”, what I want you to know is that she is not acting; that is Jaynee’s actual personality. She is British which explains the accent, she is full of life, and she genuinely LOVES the Titanic.

During our LIFE IN A DAY filming, we had to answer four questions. The first was, “What does Jaynee love?” Jaynee’s LOVE for the Titanic is GRAND. She knows every passenger and their story. She knows every detail of the construction of the RMS Titanic. She cares for every crewmember at the Titanic Museum Attraction and they care for her.

Throughout the day, Jaynee recited poem after poem about the Titanic. She engaged visitors and told them stories about the passengers on their boarding passes. What I noticed, following her around the ship, was that she captivates guests. Not only is her accent perfectly fitting for a first class maid aboard the Titanic, but also her knowledge and emotional connection draws people in. AND, I would be remiss if I didn’t mention the dogs. The Titanic Museum Attraction is now paying tribute to the dogs that were onboard the Titanic. They have 2 King Charles spaniels named Molly and Carter who “work” at the Titanic Museum Attraction in Branson, Mo. each day. When I saw Jaynee interacting with these two, I knew she was completely “head over heels” for them.

The next question to answer on my mission was “What do you fear”? I was taken back by Jaynee’s honesty and intelligence. Jaynee explained that the oil spill in the Gulf was her biggest fear at present. She explained that BP represents Britain and because she is British, it embarrasses her to think that she might be associated with such a disaster. Her vast amount of knowledge on the environment and the eco-system were surprising and her genuine care for animals shone through as she talked about the tragedy.

There was one last question that our video had to answer. “What makes Jaynee laugh?” That was apparent throughout the day. Jaynee enjoys making others laugh. She had a witty remark for every occasion. Her light-hearted nature was contagious and everyone seemed to enjoy making her laugh too.

This experience drew me in to the Titanic Museum Attraction on an entirely new level. It is not just a museum. There is a family that works together there and they are passionate about each of their positions. They are passionate about paying tribute every day to the 2,208 passengers and crew that were aboard the Titanic and they all work together to make the visitor’s experience personal and exceptional. Yes, I accomplished my goal of producing a “behind the scenes” look at Jaynee’s Life in a Day, but I gained so much more.