Our Lady of the Lake 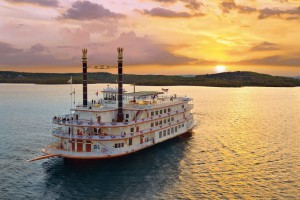 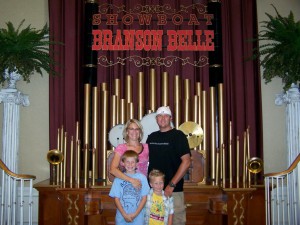 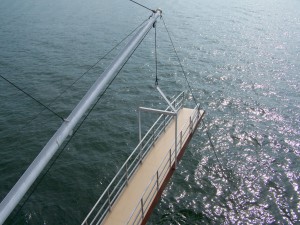 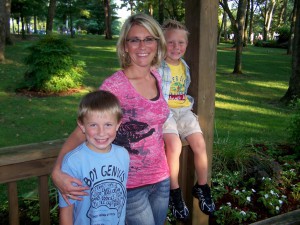 Yesterday evening, my family enjoyed a dinner cruise onboard the Showboat Branson Belle. Our Lady of the Lake has been entertaining passengers for 16+ years. When we first arrived, we walked a path through the most beautiful grounds that I have seen in this area. The landscaping is pristine and there were many photo opportunities along the way. The path lead us to the White River Landing where there was shopping, restrooms, and a box office. And in the background was the Lady herself docked on the most beautiful lake I have ever known, Table Rock Lake.

As we boarded the Belle, our boys stopped to feed some giant Carp that had been patiently waiting for our arrival. Then we were off to get our souvenir picture taken. At this point we were hot and ready to go inside for reprieve. We entered the ship and were directed to our seats, but in typical Wicker fashion, we went to the restrooms instead. When we finally found our seats in the dining hall, we were amazed at the size. We learned that the Belle can accomodate 700 guests and I believe that it was about 95% full.

There was no idle time when we sat down. The Emcee, a seasoned comedian, began telling us about the paddle boat. The boat was constructed at its port at White River Landing and was launched into Table Rock Lake on August 12, 1994. What we found to be facinating was the fact that in order to get the boat into the water after construction, they used “Launching Rails” that were covered in bananas to “Slip” the huge paddleboat into the water. I thought that slipping on banana peels was something of a cartoon myth, but no. It actually worked and the boat slipped at 14 miles per hour into Table Rock Lake, which the Emcee mentioned was the fastest the boat has ever traveled.

During the introduction, one of the audience members asked the Emcee if Nickel City was a fun place to go in Branson. She meant, Silver Dollar City, but the Emcee was relentless in teasing her throughout the show. It was pretty funny. While the Emcee gave us a history lesson, the first course of our meal was being served. The Dinner consisted of salad and bread, Beef and Chicken with Vegetables, a yummy ice cream pie dessert, iced tea, water, and coffee. The kids devoured chicken strips, veggies, and macaroni and cheese. Their dessert was ice cream and gummy bears. Perfect.

The Show was entertaining and high energy, but my favorite part was going up on the decks of the boat and peering out on the landscape of the Ozarks. I never pass up the opportunity to go to the lake. I love seeing the sun sparkle off of the gentle waves and I am one of those people that believe that the lake gives off positive ions that make you feel relaxed! We saw a few tubers going by so we waved. The boys were asking a lot of questions – How does a paddle boat work? How much does this boat weigh? When are we going tubing? Why are we on the lake and not in the water? That is why we took a picture of the “PLANK”….wink, wink.

The boys enjoyed Todd Oliver and his talking dogs. When they performed, every member of the audience was laughing. Mr. Oliver is a famous ventriloquist and he controlled masks that were attached to the dogs’ muzzles to make them appear to be talking. He made the dogs have personalities which made it funny. The Bull Dog, Irving, was very sarcastic and lazy and his nemisis, Lucy was shy and matter of fact. This was a huge hit with the kids especially.

When the show was over, we left the ship and walked ashore. The boys thanked us for taking them and told us that they had a great time! Our final thoughts were that the Showboat Branson Belle is a must see in Branson and definitely is entertaining for all ages. The show was high energy, the staff was friendly, and the scenery was breathtaking. I encourage Branson visitors to check out the deals on their website http://www.showboatbransonbelle.com/. They have a first time ever combo offer with the Titanic and when the 2 attractions are purchased together, adults save up to $13.83 per ticket.