Recommended Reading for Children-2 Heartwarming Stories about the Titanic

I want to tell you all about 2 wonderful childrens books that have recently been in the press and have really complimented what the Titanic Museum Attraction aims to accomplish for all children through the museums.


Titanicat is a wonderful childrens book that was written by Marty Crisp and published by Sleeping Bear Press, June 5, 2008. Titanicat is based on the true story of the ship’s cat of the doomed Titanic. There was a young sailor named Jim Mulholland who befriended a cat that was traveling on the Titanic with her litter of kittens. He ends up being saved by the cat as it gets off of the ship with all but one of its kittens and then Jim decides to bring the last kitten to its mother. The young sailor learns later that because he rescued the last kitten of the litter off of the Titanic, he actually escaped his own demise.  The illustrations in this book are magnificent and perfect for any child in grades 1-4. 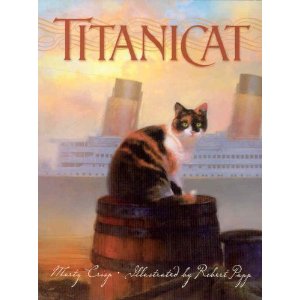 This book has been selected by the state of Missouri and the state of Tennessee as recommended reading for all schools. This selection is a very high honor to any book, and we are proud that it features the Titanic story in such an engaging way. You can purchase your copy today by visiting the Titanic Museum Attraction’s online store at https://titanicbranson.com/store/product_info.php?cPath=29&products_id=125.

The other book that I have to mention was written by a 4th grade student at Northview Primary School in Kodak, Tennessee. Nine year old Luke Copas visited the Titanic Museum Attraction in Pigeon Forge, Tn earlier this summer with his Mom and Dad. See…Luke is an avid reader and loves reading about history; one of his favorite subjects is the Titanic. Luke knows so much information about the Titanic that he decided to write a book about it. When he visited the museum, he presented the book to Mary Kellogg-Joslyn, co-owner of the museum. She was so impressed with his writing and enthusiasm that she decided to help Luke get his book published. 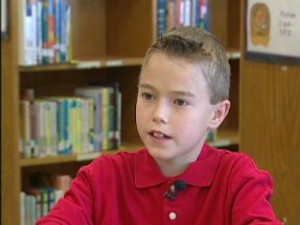 Last week on September 16, 2010, in the library at  Northview Primary School, Mary Kellogg-Joslyn and 1st Class Maid Jaynee presented Luke with his very first copy of Facts For Kids About the Titanic by Luke Copas. The WBIR news story can be found at http://www.wbir.com/news/local/story.aspx?storyid=134540&catid=8 ! Luke spent all day on Saturday at the museum signing copies of his new book and he has now been inspired to write a second book involving facts for adults. The Titanic Museum Attraction will have the book for sale in their store at the museum in Pigeon Forge, Tn and I hope that we can also include his book in our website store.

If you have any questions about how to get your hands on these two publications, send me a message or call our museum at 1-800-381-7670. Enjoy! I would love to hear your reviews!