Imagine rolling out your sleeping bag with scouting friends and spending an adventurous night of discovery aboard the towering Titanic. The museum will be empty except for the memories of passengers and crew members whose more than 400 priceless artifacts will soon make you feel like you were with them when Titanic sailed in 1912.

Bring your PJ’s and that sleeping bag and we’ll provide the surprises and incredible, true Titanic stories – along with a commemorative flashlight to guide your darkened way throughout the ship, a collectible Sleepover Patch, evening snacks and a PG rated movie.

Book your Girl Scouts Titanic experience for this once “off limits” overnight exploration event. $49.00 per VIP guest (Very Important Passenger Sleepover.) Reservations are required in advance and space is limited.

Dads everywhere, be a Prince and invite your Princess Daughter to spend a magical evening, alone with you at Titanic Branson’s Daddy-Daughter “Pretty in Pink “Date Night Special Event. Proud Princesses are encouraged wear pink in keeping with the theme.

This will be a night filled with memory making moments designed to nurture the bond between dads and daughters through a private and personal shared experience.

Reservations required. Space is limited. NO tickets sold at the door. Historically, this will be a sold out event.

Surprise your young son with a special, nighttime Flashlight Tour of the Titanic Museum Attraction. It’s a unique Mother-Son experience…just you and your son experiencing a night out together.

When the lights go dim an evening of exploring the myths and legends of Titanic begins – by flashlight. Along the way, memories of your private adventure will be made that will last a lifetime.

Titanic’s Mother-Son “Night Out” Flashlight Tour is designed to nurture the bond between moms and sons in an extraordinary way.

Reservations required. Space is limited. NO tickets sold at the door. 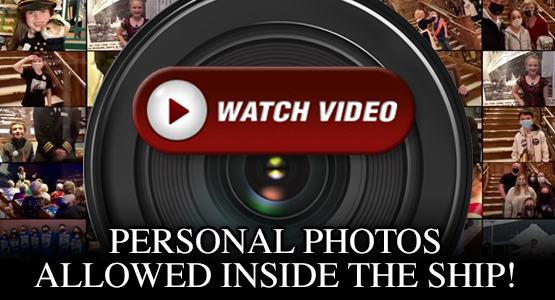 Magic Arrives
Irish Fairy Cottages Discovered at Titanic Museum Attraction
Tribute to the 187 Irish on Board the Ship.

Believe it or not, Irish Fairy, fantasy cottages have taken root at the Titanic Museum and will remain visible to visitors during the Attraction’s March tribute to the 187 Irish passengers and crew on Titanic, announces Mary Kellogg-Joslyn, President/COO and co-owner.

“While the wee builders remain invisible to humans, proof of their presence can be clearly seen in the enchanting, whimsical dwellings they’ve planted throughout the ship. No two are alike, each have their own name and unique features. However, the ones with realistic architectural elements still stand with one foot in reality and the other in a fairytale,” explains Kellogg.

Jeanne Waters-Hill, founder of Touche’, preeminent, Missouri Design Studio and designated, mortal designer of the mythological, Titanic cottages says the design process for this project was especially challenging. “I had to put on my sculptor’s hat, then think about it, research it and tap into 45 years of experience until an image slowly emerged. All in all, it took about 50 to 60 hours to build one cottage from development, construction to installation,” says Waters-Hill.

“Jeanne has been Titanic’s interior design imagineer since opening days in Branson, Mo. (2006) and Pigeon Forge, TN. (2010). Her talent for creating emotional environments to showcase our exhibits continues to amaze me. I can’t wait for the world to see the fantasy, Irish fairy cottages she designed in honor of the Irish on board Titanic.”

EVERY WEEK! SHOP AT THE SHIP WITH JAMIE!

Shop at the Ship with Jamie

First Class Maid Jamie becomes your very own personal shopper on this popular Facebook live event at the Titanic Museum Attraction! Every Thursday join us as Jamie showcases a few of our favorite retail items and gives you an inside scoop! Be sure to join us on our Facebook page to get in on the fun!

Shop at the Ship

Calling all Teachers!
School Field Trips Are Out This Year!

Bring Titanic to your schools! Virtual Tours are available. Click the link below to request your Titanic Virtual Tour!

Visit our Titanic museum educational tab and see other activities you and your students can do.

TRIBUTE TO THE MUSICIANS ABOARD TITANIC

When you visit the Titanic Museum Attraction in Branson, Mo., you will learn about the 8 heroic musicians whose comforting strains helped drown-out the sadness and sorrow of that dark night. The stories of their gallantry captured the spirit of courage, duty and self-sacrifice we honor everyday at Titanic. When the music stopped….the legend began.