Born in Ireland, Dr. O’Loughlin was an orphan, however he was raised by his Uncle and studied at Trinity College in Dublin, after which he attended and earned his medical degree at the Royal College of Surgeons in Dublin, Ireland. At 21 he started his career as a medical professional at sea and would spend 40 years serving his majesty, his fellow crew members, and passengers. At 62, Dr. O’Loughlin was becoming a bit of a curmudgeon and grumbled about changing ships after the R.M.S. Olympic had its altercation with the H.M.S. Hawke, and had entertained the thought of retiring, but Captain Smith chided the good Dr., calling him lazy and appointed him ships surgeon of the R.M.S. Titanic.

” I hope you’ve had all the required medical papers, because I can’t let you board Titanic without them. Oh, forgive me. I guess I’m so used to asking that question of third-class passengers that it’s become a habit. I know White Star Line’s 1912 boarding requirements don’t apply to you. I’m Dr. William O’Loughlin, ship surgeon on Titanic. I’m a distinguished-looking fellow in a white uniform and handlebar mustache.” 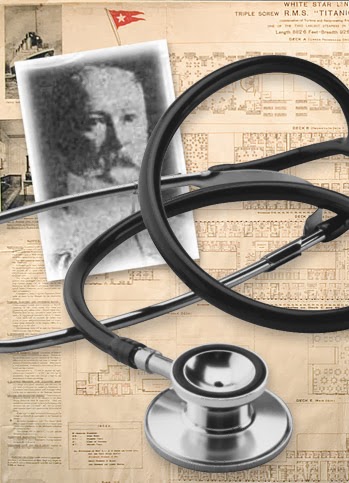 “After practicing medicine at sea for 40 years, I was about to hang up my shipboard shingle when Titanic’s good Captain Smith convinced me I should take one last assignment with him. It was hard to say no to my old friend and to the chance of ending my career on the grandest ship ever build.”

“Unhappily, I was wrong. On the night before the collision I had proposed a toast: ‘Let us drink to the mighty Titanic.'”

“As the ship’s doctor, would I be allowed into a lifeboat to help all the women and children?”

To learn more about Dr. O’Loughlin, visit the Titanic Museum Attraction in Branson, Mo or Pigeon Forge, Tn. where we tell the stories of the Irish passengers the entire Month of March and every day in honor of their memories.

Other resources on Dr. O’Loughlin:

May the Luck of the Irish Be With You.