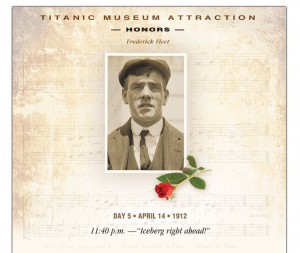 You know how some kids is born with silver spoons in their mouths? Well that weren’t me. An orphan, I got me first job at age 12 on a training ship. Stayed there till I turned 16, then went to sea as a deck boy. Worked me way up to able seaman and, blimey, look at me now. Crewman Frederick Fleet, here –24-year-old RMS Titanic lookout, 50 feet above deck in the crow’s nest.

Weather’s been mild this voyage, but it turned icy cold as the sun went down. The stars is bright alright, but their reflection on the water is so flat that me and the other lookout can’t see nothing in our path till we’re right smack on it. And that’s just what happened as Titanic sailed into that deadly ice field.

I saw it first. “Iceberg right ahead!” I yelled, soudning the alarm bell. Within 37 seconds Titanic brushed the side of the berg, showering ice onto the deck below. Climbing down from my post I feared I’d be blamed for not spotting it sooner. Seemed we might be okay until the engines stopped, and the ship began tilting head first into the sea.