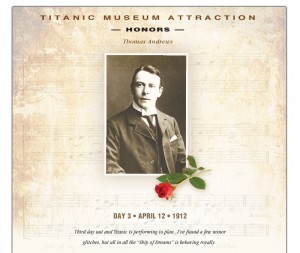 I’m Thomas Andrews, a 39-year-old happily married father of two. As managing director at Harland & Wolff in Belfast, Northern Ireland, I’m in charge of designing and building its ships. My team and I built Titanic, from keel to masthead, so I know every inch of her. I’m sailing the maiden voyage should any problems develop, but I feel more like a proud father whose beautiful offspring is making her world debut.
Of course, she was never a dream to me — just a spectacular, man-made monument of iron and steel, invincible yet vulnerable. I still have misgivings about one thing: Titanic is designed to carry 50 lifeboats, yet White Star officials cut the number to 20. They believe Titanic is almost unsinkable and, therefore, doesn’t need unnecessary, ugly boats cluttering its decks. I pray they’re right.
The sea is calm and the sky quite clear, yet the weather on deck is turning brisk. I’ve warned the lookouts to be keenly alert for icebergs, even the small ones called growlers. Navigating an ice field this time of year is likely the most critical part of our voyage.