“Mom, What does it mean to be a Hero?”, asked David. “Well, David, let’s talk about this. Let me tell you a few stories that I think you might enjoy”, said Mother. “

“Do you remember the story I told you about the teenage football player? He was driving home from practice during a really bad storm. It had been raining for days and the creek was raging across the road. He stopped in front of it and then decided he could cross, knowing that he was almost home. As he put the car in drive and proceeded through the water, the water swiftly picked up his car and began tossing it around as he was carried down stream. I remember it like it was yesterday. I was in the kitchen chopping carrots for the stew, when I glanced out the window. That’s when I saw his car and a  body being thrown around inside it. I quickly called for your Father and he ran outside to the creek. He jumped in the water just down stream from the car, grasping tightly to a giant rock. He waited for the car to come closer and as it did, he jumped to the car in the crashing waves and began trying to set the boy free. He finally was able to get into the car, just as the car high centered on a giant rock. He rescued the boy. Your father is a hero.”

“But, I have another story to tell you. Your Grandfather was just 18 when the Vietnam war began. During that time, there was a mandatory draft in the United States. You see, our government wanted to send troops to fight and there would be lives lost. He was scared, but he enlisted without waiting to be drafted. He went because our freedom is something that he didn’t take for granted. He went because he was willing to sacrifice his life to ensure that our free country stayed free for generations to come. He went to fight for you and for me. He is a true hero.”

“Wow,” said David. “Being a Hero is a big responsibility. I hope that I can be a hero someday.” “Me too, son.” said Mother.

Now through November 15, at the Titanic Museum Attractions in Branson, Mo. and Pigeon Forge, Tn., we honor all past and present military members with FREE admission. It is our way of saying Thank YOU for your service. We are grateful. (Guests must present a Military ID/Papers. One comp admission per ID, other guests in their party can receive the regular military discount by calling 800-381-7670 or by purchasing tickets at the door). 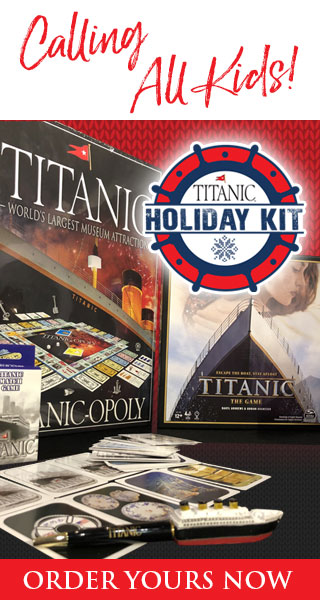